The Siloam Springs Center for the Arts (SSCA) production of “Our Town” premiered last Saturday at the Chautauqua Amphitheater in downtown Siloam Springs.

The show, free to the public, drew a large and enthusiastic audience.

Many familiar faces from the community were present in both the audience and the cast, which included several junior actors like Don Warden, director and historian at the Siloam Springs Museum; Jayme Amonson, staff member of Grace Episcopal Church in Siloam Springs; and Margaret Paulzine, volunteer at the Manna Center.

“It’s my first time in a play, but it’s been on my bucket list for years,” Paulzine said.

A number of young actors also made their debuts, including Phoenix May, a 10th grade student at Don Tyson School of Innovation and an aspiring baker; Aidan Gayler, ninth grade student and baseball and basketball player at Siloam Springs High School; and the youngest actor at 12, Paxton Weathers, a seventh year home student who enjoys everything from woodcarving to programming.

“I like having kids in my cast because I was that kid … I loved acting and didn’t really have an outlet for it,” said director Jeremy Kelly, who is also a member. of the Board of Directors of the SSCA. “If you’re a kid and you feel a bit like an outcast, find a theater company because we’re all morons. We all get along and everyone accepts people for who they are.”

“Our Town,” written by Thornton Wilder and first published and produced in 1938, is a Pulitzer Prize-winning classic that has remained a staple of American community schools and theaters. The play, at the time of its publication, was considered extremely innovative for a lack of props and settings, relates to the cycle of life, love and death in a typical American small town.

The motif and message of “Our Town” seems appropriate to the context of Siloam Springs, and the location of the Chautauqua Amphitheater in the downtown Siloam Memorial Park makes it an evocative place.

The show marks the seventh production of the SSCA, formed in 2018. The mission of the SSCA is “to educate and encourage cultural awareness through visual / audio performances, theatrical production and educational opportunities at Siloam Springs and in the surrounding communities ”.

The SSCA is planning a Christmas-themed production for December and will be hosting a fundraiser with wine tasting – which will be a paid event – at Park House Kitchen + Bar on October 16.

Andrew Mobley / Special to the Herald-Leader The Stage Manager, played by Jeremy Weathers, describes the town of Grover’s Corners during the production of “Our Town”; on Saturdays presented by the Siloam Springs Center for the Arts. 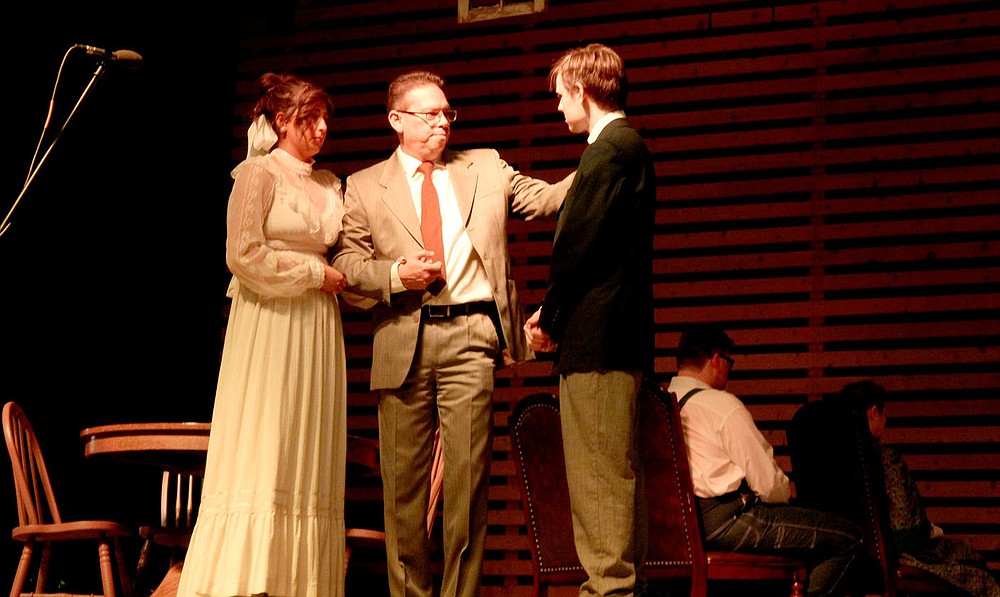 Andrew Mobley / Special to the Herald-Leader Michael G. Rivera (center) playing Mr. Webb, father of Emily Webb, played by Carson Hamilton (left) asks George Gibbs, played by Jonah Morgan (right), s ‘he will be careful of his daughter when they got married when producing "Our city" presented last weekend by the Siloam Springs Center for the Arts.